I’ve heard it all lately…

“…so they did a biopsy. And it’s metasticized.”

“…there was a new mass. In the other breast.”

“…the results are in from chemo. I had no response.”

I want to talk about something today that is hard for cancer patients or survivors. Something that may produce too much anxiety for some of my readers who are in fear of recurrence. But as a survivor, I think that watching other’s encounter new mountains and having to climb them is part of the process of being a survivor of something. Once we’ve become a part of a “club” we’re never getting out. And seeing others go through similar battles… or new battles, well, it’s part of the process of moving forward in life in your after.

It is the second wave.

Life is full of this phenomenon. Of the second wave. The period in which, after you’ve become aware of something… after you’ve walked that mile in your shoes… after.

Patients like me. We have this after. This time where we are navigating the world after having fought early stage cancer. The time where our appointment schedule lessens. The time where we have anniversaries that are 1 or 2 years or further out from this. We are just standing up again. Rising. Getting our sea legs. Perhaps anxious at times about another wave mowing us down. But mostly, in the “cancer-free” “remission” or “no evidence of disease” categories with really insanely positive prognoses.

I talked with my oncologist today. I was in for another touch point in reference to my current therapy I am taking. I talked with him about the side effects of this drug. How I am so happy to be almost halfway completed with the Nerlynx regimen. I talked to him about how I am pretty used to the fatigue again. I am used to the constant stomach ache. I am figuring out how to modify my diet. I am used to the always-present diarrhea. And I am thankful for this drug. Even with all of its side effects and its newness and somewhat unknowns, I am thankful that my cancer, that my body, has been responsive to my therapies.

We talked about my long-term risks of heart failure and the like once I hit 50. Because of all of the side effects of Her2, a protein that was present in my tumor — one that is an attribute of aggressive and fast-growing tumors, therapies. We talked about my exercise plans for dialing down the scale once I am off Nerlynx, if not before. We talked about my diet, he told me I should be “taking the weekends off” in terms of stress and find as many ways to relax and decompress as possible. This is not because I have cancer. It’s because I had it. And he will do everything possible in his toolbox to ensure I don’t encounter it again. This is the life of an Oncologist who is helping people thrive every day. This is the life of a survivor who is kicking the pants off of being alive every day.

About a month ago, I had pain in my back. And I was scared. The fear: metastitic disease {the cancer spreads to other organs}. The reality: I had shingles. And I’d exacerbated the shingles pain with yoga. So. A small break from yoga for a few weeks. A float in a float spa. And I changed to a BRAT diet {well. BRAT + coffee. Let’s not get too crazy here}. And in a bit of time, the pain was gone. The shingles healed. And the tummy even cleared up a bit for the time.

This is the life of a cancer survivor.

Because I am just hanging out in the ocean of survivorship. I am enjoying the sunshine. I am just happy to get to be in the calm and enjoy the view in a different way than I have. All while I have to watch the second wave roll in.

If you’ve had a child, you might have experienced something similar. You get pregnant. Your friend gets pregnant. And then, your friend loses the baby. And there you are, pregnant. And there she is, at a loss. It feels unfair. You might wonder, “Why do I get to be so lucky?” As you watch her wave roll in and pull her down.

If you’ve watched a family bounce back from something incredibly hard, only to see the dad lose his job or the mother lose a parent. It seems to come… in waves.

And right now, I am experiencing watching the second wave. As my friends who I went through treatment with head into their anniversaries only to receive a report of recurrence. As my friends who have been battling for a year are told they are advancing to MBCT (metastatic breast cancer thriver). As new friends receive diagnoses. As friends who have alread been there done that have evidence of new disease, localized in the breast.

It is the second wave.

And again, it feels unfair. It actually doesn’t cause me anxiety. I know that I was very fortunate with my response to treatment. I know that there are a myriad of treatment options for my +++ status. I know that I get to focus on how to become 50. 60. 70. And beyond. I know that we get to talk about heart failure being an issue for me because my cancer story is going so well. And I know that the drugs that I’m currently on, while having side effects, will not be my forever.

Gosh. The second wave is hard.

It shouldn’t be hard for me. I am not the one living the reality. I’m just living the news. But it’s hard emotionally to watch my friends, these women and people I love and fought alongside, go through this again. I mean, I know they’ll chumbawumba with all their might {I get knocked down, but I get up again} but I am grappling a bit each day to figure out how to best support these beautiful souls during yet another trial in their life.

The second wave ain’t no joke.

I hear their news. I get calls, texts, and I spring into action. That’s what I know how to do. I figure out how we can best assist them through another round of 6 chemo treatments. Another surgery. Rads. Or, what is known as “palliative care” which really truly means indefinite treatment. Because I know that just like in the first wave, just like we each needed as our world was eclipsed by a tidal wave, I know these friends just need me to be me. Whatever we have been to each other up to this point, they need that from me.

If you have a friend in their second wave… a friend who is once again feeling underwater… just be you for them. Pray for comfort from anxiety and depression. Pray for them to live life through their treatments whether for Stage 1 or Stage 4 or in-between. Help them to know that whether they need you today or in 6 months, your offer still stands. And most of all, throw them a life preserver when you can so they can come up for air.

Most of all, know this… when the second wave hits, the one who is in it may already be worn down, afraid, or over it. Lend them your love, but not your pity. Give them your shoulder and your smiles. And be positive with them that they not only CAN but they WILL stand up to this wave, just as they did the first, and ride it big time.

This is hard. As a survivor it’s hard. And as a human it’s hard. It’s hard to watch people suffer. It’s hard to not be able to take their burdens and carry them for them. But it is also the place where we are called to put our goodness into action. So when you see the second wave happen, go ahead and paddle out there on your board, grab their hand, and take it on, if you can, together. 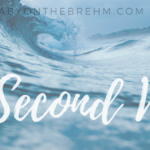