Because I said yes

A year ago. One year ago this week, I got to be a part of the Nebraska Medicine Fred and Pamela Buffett Cancer Center grand opening festivities. During the week, I spoke in front of hundreds of people— people who built the facility. They built it up as we tore cancer down.

I remember when I got a call from a girl named Jenny. It was in “my after”. After my world seriously crashed right on top of me. After “you need a mammogram.” After “the biopsy was conclusive for DCIS. You will be able to get a mastectomy. It is 💯 curable.” After “…but there is still part of the pathology that is inconclusive.” After “you have breast cancer.” After I wrote about my first round of chemo at a Nebraska Medicine clinic. And just like that the world was able to know where I was receiving treatment.

I listened to the message from this girl named, Jenny. At the time, a complete stranger. She’d been introduced to my writing via a mutual friend (who worked with her). She wondered if I’d be interested in sharing my path through breast cancer.

I seriously prayed hard on it. I talked with Adam. I had been writing about my life for 5+ years at that point but opening myself up to a wider audience welllll that thought was TERRIFYING. I had already decided I would document my treatment on my personal blog. Authentically. In my own way. I wanted to talk about the good and bad. But I also thought that in getting to widen the exposure of my voice, I would get to give a purpose to my pain. So I said yes.

And so, they profiled my whole journey. From that point forward, I shared all the highs and lows.

From that point forward, Magic has happened.

Jenny is one of the pieces of magic that I’ve gotten to take with me through the mess. She was with me at chemo. She chronicled my life during that time. She was with us when I wrote about being neutropenic. When I wrote about shaving my head. She was with me when I wore my costumes. When we rang the gong. She was the last person in the room with the hubs and I before I was wheeled back for my mastectomy. And also, there the day I completed rads. To some patients, she may have sounded like “this staff person” but through our shared time, Jenny became a member of my oncology team. And a friend for life.

She gave me a chance to say yes.

Because of saying yes to sharing my life and my hard, I DID find a sense of purpose in my pain. I found a whole community of people who had walked the same path. I found people who hadn’t but were praying for us. I found hope. Day after day, I found hope in the messages from friends and strangers alike. And the best part, I got to connect and become friends with others going through the same gosh darn thing.

A year ago today, I got to speak. Just like all that I do with Nebraska Medicine, it was an unpaid opportunity to share my story. I got to say thank you on behalf of so many of the patients — a thank you to those who made the new Cancer Institute possible because they said YES.

They said yes to funding, directing, building, and realizing a dream. A dream that would benefit people like me.

The most amazing things have happened because I said yes to a phone call a few years back.

I’ve gotten to help support my family, be present with my boys, find a purpose to my pain, celebrate being cancer-free because I said yes. I will continue to turn that part of my life into my future as I pen a book and secure more and more speaking and writing opportunities…all because I said yes.

And as I look back a year ago today to getting to say THANK YOU to the people who built the new building that houses my care team, that has become a second home throughout treatment to many of my now friends, I find myself so grateful that I said yes.

This morning, I said yes to sitting on the back patio with coffee, watching the boys play laser tag before school. I got to say yes to that because I got to get better. Because two and half years after my diagnosis and one year after the new cancer center opened, I get to live this life every day as a thriver — sharing my story and my life by just being me. It is a tremendous privelege to get to be alive and to get to be exactly who I am. I often wonder if I’d have found myself in this spot if I’d have said no.

As I sipped coffee on the back patio this morning, listening to the boys play, and saw my Facebook memory for today, a picture with Jenny, I thought of where I was a year ago today. I thought about all the life that has happened in the last 365 days. Since my diagnosis. All the moments I’ve gotten. All the ways I’ve ended up right where I need to be. And I was so very grateful that I said yes. 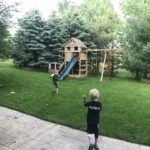 Because I said yes