Slow. Kids (and pets) at play.

It was a gorgeous night for sitting a spell around the fire pit. The adults were all sitting around chatting, enjoying a beverage. The kids, seven of them ranging from age 12 to 6, were running through the front and back yard. Their flashlights struck through the dark of the night as ghosts in the graveyard played out. Two neighbor girls had just joined us and were telling about their upcoming post-graduation trip. It was just what late spring-almost summer nights are supposed to be.

And then it was like the needle on the record just stopped. A child called out, “… got hit by a car!” The men went running, kids were shouting, we moms looked at each other both thinking, “who? What? Did you hear what I think I heard?” We ran around to the front yard to see my husband hovered over our neighbor’s puppy that he’d carried into our driveway. The puppy — half poodle, half st bernaise mountain dog — had been new to the block three months ago. A very playful, active puppy. The dog was just six months old and his fur was dark. So was the night. The driver passing through the neighborhood didn’t see him. And he felt so terrible.

It was an accident. It truly was. It was one of those things that was just the wrong configuration of events that lined up to make a heartbreaking scenario.

But I have to admit, as we talked through it later, we all debriefed and each of us parents swore we heard the child who yelled say, “ insert-name-of-kid-here got hit by a car!!” It was one of those moments that things sort of swirled about us all like we were on some sort of after-school-special.

I was so sad that the furbaby was hit. Especially because he, like most family pets, was so much more than a dog to our neighbors.

But I have to be honest. I was also so relieved it had not been a child. It reminded me of a classmate of mine losing his little brother when a driver went around a school bus and struck the child. It was like a cautionary tale to me as we are just on the cusp of the summer. A chance to explain to the kids this morning that we are NEVER to be in the street. We need to be aware of cars and that even though accidents are truly that — accidents — it doesn’t mean they aren’t sometimes preventable.

The puppy didn’t make it. He had been rolled over by a huge truck. He sustained such injuries that could not be resolved. We shared it with the boys the next morning as they had all gathered around the dog as the neighbors and we assessed the injuries prior to him being taken to the vet. It was so tremendously sad. All the kids had been running around and in some form, had seen the accident or watched my husband carrying him out of the street. We all watched as the puppy laid so calm and could not seem to walk. There were a lot of tears.

I felt so sad for puppy. For the neighbors who lost their just six months old family member. I felt horrible for the driver of the truck who was all torn up after the accident.

It was an accident. Accidents do happen. But it was also so sad. And such a reminder to me of how things change in an instant.

It was a reminder to me to remind YOU that kids are kids and we want them to play. But that means they WILL be outside. Near the streets. My boys are outside more than they are in— all year round. And I celebrate that. We talk about boundaries and rules constantly. “No going with strangers. No playing in the street. Ask before going to the neighbors and look both ways. Don’t run after a ball, come get an adult…” and on and on. And I believe that they mind our rules *pretty* well.

I’m about to get my own yellow plastic kid to plop at the edge of my driveway. Heck, by the end of the summer, maybe I’ll be mimicking Modern Family’s Claire Dunphy with her “Slow Kids” signs.

This is serious stuff. I am laying down the law with my kids. But I also want my kids to feel safe playing outside, enjoying unstructured play, and just being kids. So I am seriously begging you… just slow a bit… drive the appropriate speed for the streets you are driving on and please… remember that especially on these upcoming “good-weather” nights, there may be kids and pets at play.

Please please please… especially in these nicer months as you enjoy a drive, windows down, radio up… please also pay extra attention to the road. Please don’t look at your phone instead of the road. And if you are in a residential area, for this Mama and all others, could you please be even a little more aware of your surroundings? For me? For my babies? For my neighbors’ pups?

Reminder: Slow. Kids (and pets) are at play. 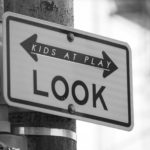 Slow. Kids (and pets) at play.