Teacher, you make me cry

I just started crying. Golly darn it. It wasn’t the time. Or the place. But of course my emotions didn’t seem to care about any of that.

We’d just been chatting, my son’s teacher and I, about Friday Folders. We were outside the school as she waved cars forward during carpool time. And I corralled my foursome that I take home on Fridays.

And then I became “that parent.” Teachers might also know “that parent” to be the one who is overly-attached to them. Welp. That is pretty much me.

It’s always been a problem. Since the Oldest started school, I have fallen hard, each year, for his educators. And that feeling is even further cemented by the fact that each year my child has such a love for his classroom experience and environment that he laments the end of each year stating he will miss his teacher so much the following year that he just doesn’t know how he’ll go on (he *might* also suffer from a little bit of “that student” -itis wherein he gets a wee bit attached to people. The apple doesn’t fall far, I suppose.).

But I didn’t know it would happen with my second. After all, he had been given a different Kindergarten teacher than our first had. How could I love her the same?

The Oldest. He’s what I would call easy. As his mother, that ease is a blessing. The Middlest, while one of my favorite people and also a blessing, is not what I would, at first choice, call easy. He is quirky. He is impulsive. And he is not all that concerned with the rules. So while I think it is fair to say that he is very intelligent and that the academic part of school seems to prove easy to him, I know, having been a kid who talked non-stop and didn’t always listen, that not all teachers are going to be as gracious at overlooking the things that disrupt the class. Nor would I expect them to.

But she gets him. And she celebrates him for who he is — not who he isn’t. She sees all the sides of this little boy that we as his parents see. She has taken her time and patience and given a big dose to him this year. And she has made it so he, too, believes he will be lost without her in the next school year.

Some year, my kids are going to have teachers that I think are just meh, I am sure. I mean, right? It has to happen eventually. And that year might prove be devastating because we’ve been spoiled year over year with those who were made to teach.

That’s the thing about teachers — the really good ones — they don’t just teach, they reach. They reach into kids lives and hearts and they make these kids feel excited to be at school each day. And as a parent who gets to see my children’s day made over and over because of that insane talent to reach, my eyes and heart at times, are overflowing.

And so. I don’t think I unloaded allll that on her, his teacher, in the carpool lane. But I did tell her that we are so lucky to have her for him. And then, I started to tear up behind my Ray-bans, at the thought of him, and us, not having her next year. Hoping and praying that his next teacher sees in him what she has. Hoping and praying that the next kiddos she has see what a great teacher she is.

Teacher, you make me cry. All of those my kids have had do. And I really try not to do it in front of you and make it all awkward. But if, for that moment, you could see and know that you’re making a lasting impact on my kid and there is no way for my words to ever speak for my heart, then I’m guessing I’ll continue to tear up every so often and wear the “that parent” label proudly. 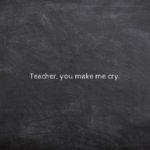 Teacher, you make me cry