Charles dickens. Smart guy that one.

Over the last several years, I’ve repeated those words often.

It is the best of times.

It is the worst of times.

There are mothers who will shake their fists at that and tell me, “ohhhh. It’s never the worst.”

But for me, there have been days, hours, minutes, that have been harder than I ever would have anticipated.

And then. There are naysayers who can’t believe that being in charge of an actual human lends to Moments. weeks. stages. years. that add up to be better than the best parts of my life.

It’s an oxymoron on repeat.

A thousand different contradictions that shouldn’t work together.

It is a constant mindscrew of emotions. Something all parents talk about but yet, there seems no simple way to explain.

Because it’s all the things.

In any given moment.

It’s hard. The mentally defeating madness. The holding the door knob. The sticking to your guns. The not-going-fullblown-mombie when the exhaustion is at its peak.

It’s soft. The melting into your chest. Their eyelashes atop their cheeks. Their breathing rising and falling.

It’s big. The first full night of sleep in months (or years). The way they become their own self. The day they drive away, behind the wheel.

It’s small. The fingers. The toes. The moments of just-right without being anything of any worldly value.

It’s loud. The stomping of feet up the stairs. The rhinos tromping about in the morning. The Imagine Dragons blaring in the car.

It’s quiet. The moments in the night where you wonder if you got it right. The moments when they roll their eyes instead of answer back. The times when the house feels empty after years of hours upon hours of noise.

It’s calm. The rocking back and forth. The family movie nights after a hot summer day. The way it feels to know another human in such a comfortable way.

It’s chaos. The screaming of a hungry babe. The tantrums of a toddler. The crazy train constantly passing through the station while you are just trying to have a three-minute-mom-chat.

It is the get tos. The giggle fits at the end of the day in the dark of the room. The pride when they come home from school beaming from ear to ear. The being their person.

And have tos. The being responsible for another person from the time you meet until forever after. The teaching them the hard stuff. The understanding that they aren’t even ours to “keep.”

It’s endless. The laundry. Upon laundry. The meals. The minutia of growing children into self-sufficient adults.

It’s finite. The stages of little. And middle. And then, big.

It’s messy. The diaper genie filled to the brim. The sharpie — all over the place. The teenage room with a floor that can’t be found.

It’s clean. The… oh wait… it’s hardly ever exactly clean. Until there’s moving out. And empty nesting. And then, the clean is like a hollow place.

It is scarce. The sleep. The time. At times, the patience.

It’s long. The nights with a wants-to-be-near-you one. The moments of sheer meltdown status. The days of going from here to there.

It’s short. The time you have with littles before they become bigs. The years that morph from minutes without notice.

It’s simple. When you remind yourself that you really just need to love them. In it. Through it. During it. After it. And always.

It is in the exhale. To let go. To take a breath. To move forward. To fall into bed at the end of the day.

It is one part magic. Another part mayhem.

It is consistently inconsistent.

It is depleting. Sometimes without any offering in sight of refueling.

And then, fulfilling. Moreso than most things I’ve been a part of.

It’s monotonous. The day after dayness. The attempts to stay consistent. To be the adult.

It can be a complete and utter shitshow. And then, as romantic as can be.

I’ve said it before and I’ll say it 1 million times over I am sure. Getting to parent these children, it is all types of things that shouldn’t work together. But it is as if the weight of all things opposite pulls me as a mother, as a parent, to the center of it all; with a force that can’t be replicated by much else that I can think of or have experienced.

It’s the best of times.

It’s the worst of times.

And if I had to, I’d choose it all — the bad with the good, the wins with losses, the downs with the ups — over again. 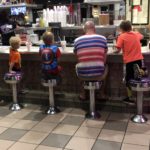