It’s been awhile since I’ve shared an update about my ductless wonders. I am nearing another anniversary of the gals (this set will be one-year-old in August) and I thought, what better time to dish about my pair, how they are hangin’, and where they are now?

And for this entry, the main dish is: Nipples.

The whole idea of nipples is just bizarre to me. Like boobs, without nipples, are just any other part of the body, right? The makeup of a breast is essentially fat, a little muscle, some ducts, and a nipple. So essentially, you take these two mounds of fat (or maybe not mounds if your boobs are anything like mine were pre-cancer and post-nursing) and you adorn them with a little nubbon atop and boom — sexy fat — apparently. It makes no sense. But it’s the world we live in.

(It is at this point where I would like to share that pre-cancer and pre-nursing when my boobs were just young pups, I actually had this business idea of selling fake nipples that you could stick on other parts of your body to make the “fat” more attractive. For instance, why wouldn’t six nipples on my outer and inner thighs also turn them into sexy fat? It makes two random chest balls “sexy” and all those are is fat and ducts, right? I wanted to name them “Dirks” because I thought the name would be catchy and hopefully, so would the body nipples. Who would have known then that nipples would become such a hot topic in my life.)

I was never that keen on my rack. I mean, sure, my husband thought it was fantastic. But in my estimation, it was nothing to write home about. And I was actually good with that. I kept them mostly under wraps. And they kept mostly to themselves, hardly ever allowing for any cleavage to happen because they basically sat as far from one another as possible without sittin’ in my pits.

Because of their lack of value to me, you can imagine my surprise when I was told I had an intruder in my breasts and that they would pretty much need to evacuate the premises. And because of our lack of fondness for one another, while they’d been useful for nursing and the occasional jolly-good-times, but otherwise, I believe my first thought was good riddance.

I initially contemplated not having reconstruction. Okay. I really mean, for a hot minute. But when you are 33-years-old, that is rarely recommended. Apparently studies and research have found that the emotional healing is a smoother process when the survivor has a body somewhat resembling the body they had before the attack on their own soil.

So almost immediately after I received my diagnosis, we started talking about boobs. Implants. Shapes. Materials. It felt like I was picking out a new car. Not a new body part. I began to learn so much. I found out that while I wanted to be an itty bitty B, the sizing was not exactly up to me. I learned that while there are saline and silicone implants, saline can be left with rippling and dimpling moreso than silicone. I learned that there are smooth and textured implants and the textured ones are often referred to as “gummy bear implants” due to the way they feel. I learned about expanders. And about the process of the procedures when undergoing chemotherapy, surgery, and then radiation. I learned that getting a “boob job” or “breast augmentation” is so largely different a process from having reconstruction. And along with so much else, I learned that I could keep my nipples.

Well color me surprised! I can keep the weirdest part of a human body? Why would I want to do that?

My first thought: Heck no, they gotta go.

My second thought: Why would anyone keep them?

My reality: After a complete double mastectomy and first section of lymph nodes removed, I still have my nipples. Or as I often remind anyone and everyone, I have one and a half of them.

The decision to keep my nipples was one of the most grueling decisions of my treatment and cancer fight. It sounds dumb when I admit that. Why wouldn’t I just get rid of them if I was so conflicted?

I had the benefit of talking to several oncologists — a sampling of some who knew one another and some who didn’t — and I was constantly given the same information which, in short, was “we recommend that, at your age, if you can keep them, you ought to.” I talked to patients who were in the same place. I talked to survivors. I did a bit of my own research. And in the end, the suckers are still (pretty much) going strong.

Here are a few things that led to my decision:

So. Do I regret my decision?

No. At this stage of the game, I do not regret the choice to keep my nipples.

Each and every woman/patient gets to make the decision that feels the best for them and to them given their own unique diagnosis. To keep my nipples was not something I entered into lightly and think that all going through and trying to make the decsion should feel like it is theirs to make if there is a decision to be made.

I do believe that when I look in the mirror, rarely do I ever think, “aww man… I had a double mastectomy.” Sure. There are scars and some bruising on my peaks, but overall, the appearance of my reconstructed chest is actually pretty miraculous. And I think that partially may have to do with the overall appearance after choosing nipple-sparing.

I have these sort of nice, perky funbags.

(I honestly prefer to call them any word that isn’t breasts. Because breasts are the evil jerks that tried to kill my joy. So I call them ta tas. Hooters. Tits. Foobs. While I know that’s all rather crass and would cause either of my grandfathers to roll over in their graves, I personally find it wildly hilarious to assign them as many different monikers as possible since I feel like a cyborg in my chestal region.)

So I have these bionic boobies. And they sit up in such a lovely manner. And after one double mastectomy, 11 months of expanders, a phase 2 reconstruction and one revision to these things that are merely designed to make people feel like a natural woman, I have to admit, they are round and voluptuous (big thanks to my Plastics guy and my Surg Onc for knowing the boobs like nobody’s biz).

They are actually pretty darn symmetrical (always remember — sisters, not twins). They make cleavage rather well. And they have no cancer in them. I mean, seriously, my post-breast cancer bosom might just be the best chest I’ve ever had.

And then. I have one-eyed jack.

One-eyed jack. Lefteye Lopez. Whatever you wanna call it. I have one large and in-charge perma-pointed out nipple. And one that is the sideshow.

Yes. I only have one and a half nipples due to a small infection in Righty closely following my mastectomy which led to part of the nipple tip falling off (picture what happens to a baby’s umbilical cord when it turns black and falls off. This is why I called it the bacon bit nip. Because it was black and crunchy. Not that I ate it.).

And I am pretty still pretty self-concious about them. The mounds and the nips. Because I feel like I’m a 36-year-old who just hit puberty. So adding one and half perked-out nipples to the Laverne and Shirley’s is just another layer of the cake.

And in a way, the nipples seem to add an interesting dilemma. If I wear a swimsuit, I don’t need any padding. Because the silicone legit stands on its own. And because of comfort on my scar lines, I don’t really want to wear underwire — while I am close to nill on any feelings or sensations on my fiery biscuits due to the lack of nerve endings, the area of the scar tissue beneath the bazoombas is tender after too much pressure or rubbing of wires. I would be most comfortable with no bra or with a small bralette or sports bra. But then, it’s Nipple City. Or really even moreso like one big skyscraper in the skyline and then a smaller less showstopping place on the horizon. As such, I have to be honest, I sometimes feel like people can’t keep their gaze on my face. Their eyes seem drawn to the Head Honcho on the Left. And I really just want to blurt out, “No I’m not cold. I had cancer. And kept my nipples. Lefty is always at attention. Righty partially bit the dust. It’s not you. It’s them. Pardon my nipples.”

The reality, of course, is that most people probably don’t notice. Nor would they judge me for going braless given my story. Nor should I really care even if I didn’t have a story. But when you suddenly start busting out of dresses after years of having nothing to fill them, it’s an adjustment, for sure. And when the cancer attacked your sexy fat, it just makes for a whole lotta different dynamics to deal with.

In fact, the boob stuff is the funny part of breast cancer. If there is one.

But would I recommend (I AM NOT A PHYSICIAN) a nipple-sparing procedure with the right team behind the scalpel, absolutely. Because even if the one and half bits on my tits are a little out-there, I really think aesthetically (and because there was no increased or perceived risk to my health) it was the best route for my age and stage and moving forward without mammaries.

So. In this update, let me end with this, once again, and let’s just get it out in the open since the gals are so out there already: The nipples are real. The boobs are fake. And I’m just happy to be here. Lefteye and all. And the next time you feel visually assaulted by someone’s plump and perkies, just know that they may not be what they seem. And that every body is weird, wonderful, and wacky. Nips, tits, and all. 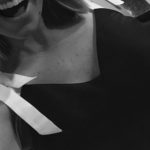