That time I walked my green mile

I was worked up already. When I walked into my doctor’s office with a four and two-year-old in tow, I could feel anxiety prickling under my skin. As I sat on the exam table I felt uneasy. As she had me lay back to address my area of concern, a lump in my right breast that I’d first discovered a couple days prior, my heart rate accelerated. And as she palpate the area and looked to the ceiling as if in thought, I could feel my throat dry.

“Well. I want you to get a mammogram.”

And immediately, all the anxiety that had been working up inside of me began to spill out through tears.

That day. The Friday before Labor Day 2015. It was the day that I began to walk my Green Mile.

My green mile. Why that name? Because the period of my life… the next three weeks… they reminded me of the movie. the one where Tom Hanks walks prisoners from their living to their deaths. And they walk the green tile. And that time, it was, I thought, my green mile. One of the darkest periods of my 36 years. A walk in my life that I thought was taking me to my end. And in many ways, it was an end. Of a time. Of a time before.

In the afternoon, I attended an appointment for my first mammogram. And following, I underwent a breast ultrasound where I learned that a veritable snowstorm of microcalcifications had setup their own Occupy Righty operation in my breast.

That day, I panicked. I called my parents. I made my husband come home from work. I got dressed for a friend’s wedding that I was supposed to be attending and instead, went to my mammogram. Then to the wedding. Where I relayed the happenings to some of my very best people. And off and on, I sobbed. That night, I sobbed. I held onto my husband. I held onto my boys. I tried to hold myself together but I absolutely could not. I already knew somehow.

From that day to September 18, my fate felt in limbo. My expiration date felt impending. And I walked through each day filled with fear.

I believed that whenever I was to receive my full diagnosis, I would be told that I had not years, but days, left. I woke each day believing that I had not just been living with a lump in my breast but that, in fact, I was dying from breast cancer. I believed it was likely everywhere and that I’d been destined for 33 years to be the end of my life. I was preparing for the worst. Not because I am a pessimist. But because it felt like that was how things were unfolding.

I struggled, in that time, to look up. Instead, I stared down as I attempted to put one foot in front of the other. And then do that again. And again. The green mile, I named it, was the most treacherous path If ever had to walk.

I didn’t want to walk forward, toward my new reality. I wanted to turn back around and never have to deal with my circumstances — that I was likely one of the “one in eight” who receives a diagnosis of breast cancer.

For three weeks — some of the longest minutes of my existence occurred. I prayed. I pleaded. I cried. And cried. And I slowly collected information throughout those weeks.

For three weeks, instead of living in the present, I feared for the future. And I woke each morning with trepidation of what phone call would come that day. My mind never shut down. My eyes gave away my sullen spirit. I clung tightly to my boys, afraid to leave them each night. I imagined how they would grow without me. Selfishly I wanted to be with them to see them grow. But in true mom mind, I was okay with it being me… and not one of them. I was exhausted the minute I woke, believing that each step I took was just one closer to my ending.

I felt like a prisoner waiting on death row. And I believed that as I walked into meet my Oncologist for the first time that I was going to hear how long I had left.

It all sounds so dramatic when I write it. When I actually relive the emotions I felt, I feel like I was so overreacting. But the green mule was actually a weird blessing.

On September 18, three weeks following my first mammogram, I was told that my cancer was early stage. It was likely stage one or two. And I exhaled.

I had to walk my green mile. I had to grapple and deal and marinate with all the realness of an attack on my own soil… an intruder inside of me who had been there without announcing itself or asking to come in. I had to put my trust in God and the doctors that the plans they were making were the right ones. And I had to let it unfold.

And I walked away that day. I turned right. I got off the path. The green mile. I made the decision that after that 3-week mourning, I would be abnormally me. I would do this in every way I knew how to do it. And I would be a thriver.

I decided that day, the day I met my oncologist, that I would allow him to figure out my treatment, I would let God work on my heart, and I would have to be along for their ride. I decided I couldn’t continue to walk the green mile. And that even if eventually, cancer killed me, I needed to remember that I wasn’t dead yet. And that until my very last breath, I needed to live and live big. And bold. And abundantly.

And I think I’ve done just that.

As I look back three years. As I think of all of the unfolding that occurred on the Friday before Labor Day, I think of how I was called that day to do something I didn’t ever plan to do. I think of how that one day transformed my life. And I think of how that green mile actually prepared me for the battle. I grieved. I lived in a fog. And then, I had to get back to it. To living.

Because I wasn’t dying.

It wasn’t my death sentence, that mammogram. Instead, it was actually what lead to me having a longer life than I would have had I not gone in. It wasn’t the end of my story. It was the start of a very complex, weird, chapter. And it was a very very dark day.

We have these times in our life where it feels like our ending. Like we are walking the plank and we will never return. And then, sometimes, some of us, we get to walk back into our worlds, changed. But still here. We walk what we believe to be our green mile. And then, we get to veer off the path. And survive the storm.

Today, three years later, I have after market parts — including one perfectly perfect boob. That’s more perfect boobs than I ever had before. I have faith. Bigger faith than I ever carried in my before. I have my babies. And my husband. These people who have been to the ends of the earth and back and have stayed with me through the dark and stormy nights. And have brightened up my days. I have family and friends. I get to know the beauty of a true tribe. And I get to see and feel goodness most of my days. I have a smile that is real and true. Contentment in who I’ve had to become. And love for the getting to be healthy.

I’m still doing some treatment. So it isn’t all over. And it isn’t all roses. But the thorns aren’t getting the spotlight in my story.

I will never not remember the day. The day my world came crashing down. The day I began to tread onward down the green mile. But I can also now add to it that while it was and will always be awfully awful, and it brought many days and times with that have been more challenging than what I thought I’d have to do, I can do hard things. And when I must, I will.

Three years down from diagnosis… forever to go. So glad I get to write those words. Looking forward to writing them year over year. 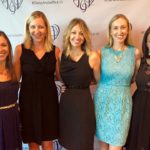 That time I walked my green mile